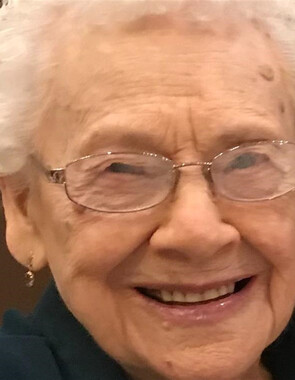 Back to Erma's story

After 100 years of hard work, intense love, delicious desserts, and lots of laughs, God called home one of the best of us.
Erma Gruhn, age 100, of Preston, IA, passed away Friday, February 7, 2020 at Clinton Mercy Hospital. A funeral service will be held Thursday, February 13, 2020, at 10:30 am, at Calvary Lutheran Church in Sabula, IA. Burial will follow at Miles Cemetery. Visitation will take place Wednesday, February 12, 2020, from 4pm to 7pm at Calvary Lutheran Church, as well as one hour prior to Thursday's funeral service. A memorial fund has been established in Erma's name. Family and friends are welcome to share in Erma's life at lawjonesfuneralhome.com.
Though her last month wasn't the easiest, Erma lived a full, wonderful life, and had too many blessings to count. Notably, she was active into her final years, and was able to spend quality time with those she loved. She was born May 5, 1919, in Vesta, MN, the daughter of Herman and Alice (Hoepner) Schwartz. At the age of 3, her parents moved their family to Sabula, IA, where Erma made her lifelong home.
She married Eldon Gruhn at his parents' home in rural Sabula, and the couple went on to have two children, David and Eldona. It was in these early years, that Eldon and Erma purchased what would become their family farm, and cemented themselves into the Sabula community. Together, they worked that farm for decades, valuing hard work, faith, and family.
Now, plenty of people are active in their churches, and bless them for it, but few actually take it upon themselves to create one. Erma and Eldon were instrumental in the founding and building of Calvary Lutheran Church in Sabula. Erma cherished her connection to God, and gave of herself to her church, and fellow parishioners.
Erma was born to be a host! She adored her days and evenings baking and cooking for family and friends. And if you weren't a family member or friend?...well, that didn't really matter. You see, Erma never met a stranger. She welcomed you into her heart at first glance. And if you were lucky enough to be invited into her home, you sure didn't leave hungry! Sitting down at Erma's table and seeing her smiling face, as she handed you a slice of her homemade apple pie, was about the closest thing to heaven that one can experience in this life. She also loved quilting, crocheting, reading, and gardening.
But don't let her domestic talents make you think she was a boring lady. A lover of polka music, when Saturday nights rolled around, Erma would turn up the speakers, and proclaim, "tonight's my night to howl!" She was active in 4-H club and women's card club, and had a sense of humor we will never forget. She'd "zing ya" before you knew what hit you.
Erma will be dearly missed by her daughter, Eldona (Bob) Turney, of Clinton, IA; three grandchildren, Brent Turney, of Beecher, IL, Tami (Corey Nichols) Redman, of Clinton, IA, and Kurt (Tracey) Gruhn, of Farley, IA; six great-grandchildren, Tyler (Allison), Jared, Logan, Ethan, Abby, and Joey; daughter-in-law, Connie Wagner, of Preston, IA; sister-in-law, Jeanette Gruhn; as well as many extended family members and friends.
She is preceded in death by her parents, Herman and Alice; husband, Eldon Gruhn; son, David Gruhn; grandson, Kevin Gruhn; siblings, Vernon Schwartz, Ray Schwartz, Hugo Schwartz, Clifford Schwartz, and Lucille Henrickson; granddaughter-in-law, Karen Turney; and grandson-in-law, Mike Redman.
Published on February 10, 2020
To send flowers to the family of Erma Gruhn, please visit Tribute Store.

Send flowers
in memory of Erma