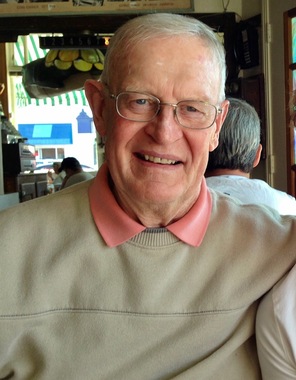 Back to James's story

James A. Dierks, age 81, passed away on Sunday, February 2nd, at his home in Glendale, California.

Jim was born March 23, 1938 in Clinton, Iowa, to Marvin and Berniece (Beecher) Dierks. He graduated from Clinton High School in 1957. Soon after, he followed in his big brother's footsteps and began his 45-year career in the railroad industry. He met the love of his life, Dalia Gaizutis, in Glendale, Calif., and 5 short months later, married in November, 1967. Together, they traveled throughout Europe and the United States. Hawaii quickly became a favorite destination of theirs.

In his spare time enjoyed hiking, long walks with their beloved dog, Lola, and sharing jokes with his friends near and far. He spent much of his time following the stock market and hoped to "keep America great".

Jim was a gentle man, treating everyone with kindness and respect, and was always willing to help anyone in need. His big smile and happy personality will be greatly missed.

He is survived by his wife Dalia; sister Susie Judd and brother-in-law Larry Judd of Clinton, Iowa; and many nieces and nephews. He is preceded in death by his parents; brothers John and Marvin; and sisters Jean Smith, Madonna Hansen, and Noreen Yopst.

Those who knew Jim know he hated being fussed over and would rather give than receive. In lieu of funeral services, at his request, memorial donations can be made to the Leukemia Research Foundation at www.allbloodcancers.org/donate/.
Published on February 8, 2020
To send flowers to the family of James Allen Dierks, please visit Tribute Store.

Send flowers
in memory of James

A place to share condolences and memories.
The guestbook expires on May 07, 2020.

Kay Haley
So sorry for your loss, Susie, Larry and Dawno and family.
KAREN GOETTSCH
Oh Jimmy.....I miss you already but seeing this great smile of yours makes me feel as if you are right here. What fond memories I have growing up with you just two doors away as you were always smiling or laughing with a little bit of teasing thrown in for good measure. Sharing meals with you and your family was such fun....I'm sure this is where the saying "border house reach" came from . Thank you for bringing Susie to visit me when she visited you as those were special times too. I know your "little sis" will miss you dearly "big brother" so may you rest in peace as the heavens have now received a beautiful angel. God Bless You Always my dear friend.....xoxoxo
Janice Gluesing
Susie, so sorry to see that your brother has passed. You sure are carrying a heavy load. You are in my prayers dear friend.
Sheila (Baker) Franzen
I loved Jim when I was a kid and he dated Jeane, so many years ago. I still have the Valentine he gave me, one of those kid things you never
let go of. He is just as handsome in this pic of him all of these years
later. May he rest in peace and unite his friendship in heaven with
Jeane again, I am sure she is smiling when he arrived. What a true sweet man and our sympathy to his family in this difficult time.
View all