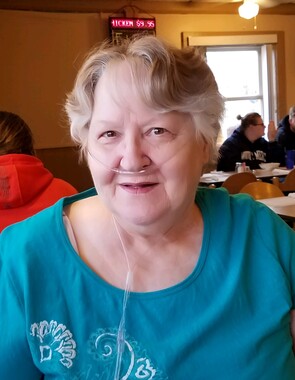 Back to Kathryn's story

Kathryn "Kay" M. Young, 75, of Clinton passed away Tuesday, December 31, 2019 at her home - Clinton.
A Celebration of Life Gathering will be from 1:00 to 4:00 pm, Saturday, January 11, 2020 at the Clinton Chapel Snell-Zornig Funeral Homes and Crematory.
Kathryn Marie Welch was born June 23, 1944, the daughter of Richard and Gladyce (Curtis) Welch. She was raised by her mother and step father Floyd Trunnell. She attended United Township Schools in East Moline. She married Ronald Young on July 17, 1962, they were later divorced.
Kay enjoyed reading, shopping, playing cards and board games; but above everything else she loved her family and enjoyed the time that she spent with them.
She is survived by her three children: Leroy (LeAnn) Young of Clinton, Kim Bousman of Camanche and Jennifer Marken of Camanche; nine grandchildren: Erica (Raul) Martinez of Albany, Illinois, Jared (Lexi) Petersen of Cedar Rapids, Lynn Pachner of Evanston, Illinois, Travis Bousman of Camanche, Toni Bousman of Oneida, Illinois, Jessica Bousman of Altona, Illinois, Dan Pike of Albuquerque, New Mexico, Melissa Marken of Freeport, Illinois and Cody (Emerald) Young of Clinton; 17 great grandchildren; two sisters: Peggy Pawlak of Coon Rapids, Minnesota and Ginger (Tom) Elliott of Fargo, North Dakota and several nieces and nephews.
Kay was preceded in death by her parents, one brother and one sister.
The Snell-Zornig Funeral Homes and Crematory is honored to serve Kay's family and online condolences may be expressed by visiting her obituary at www.snellzornig.com.
Published on January 6, 2020
To send flowers to the family of Kathryn M. Young, please visit Tribute Store.

Send flowers
in memory of Kathryn

A place to share condolences and memories.
The guestbook expires on April 05, 2020.