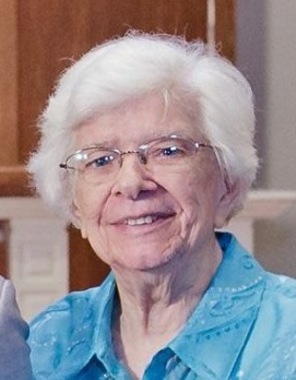 Back to Yvonne's story

Her funeral service will be 2:00 PM Sunday, December 15, 2019, at the Fulton Chapel of the Bosma-Renkes Funeral Home with visitation from 1:00 PM until the time of the service. Pastor Rita Wolf will officiate. Interment will take place at Lower York Cemetery in Thomson, IL. A memorial to Thomson United Methodist Church has been established.

Yvonne was born July 10, 1925, in Camanche, IA, to Harry G. and Emily D. (Gordon) McKenrick. She was educated in the Camanche Grade Schools and was a 1943 graduate of Clinton High School in Clinton, IA. Yvonne married John Simpson Jr. on June 2, 1950, in Camanche. He died January 1, 2012. Yvonne was a member of the Thomson United Methodist Church. She was a homemaker who enjoyed cross stitching and reading. She enjoyed gardening especially growing flowers.

She was preceded in death by her parents; her husband, John; one great-grandson, Carson Jones; one sister, Amy Diercks; and one brother, Sam McKenrick.

Plant a tree in memory
of Yvonne

A place to share condolences and memories.
The guestbook expires on March 10, 2020.

Thank you for letting us know of the passing of you dear mother, mother-in-law, grandmother and great-grandmother. Please accept our sincere condolences for your loss from your cousins in Manitoba, Canada.